The asbestos abatement firm Veerkracht recently worked on 1235 student rooms for SSH, the student housing corporation from Utrecht. It was an incredibly challenging project that had to be carried out within a short period of time. Geert Rollingswier, director of Veerkracht, tells us more.

‘Once we’d made an inventory, it looked like we were dealing with amphibole (amosite) asbestos in the window frame plating on the facade. The rule of thumb when working with amosite is that everything needs to be as clean as possible. We consulted with SSH and carried out some pilot asbestos removals. Then, it was time start the real work. That was a true challenge: three flats, each with about 300 rooms, needed asbestos removed. Ten units per day. 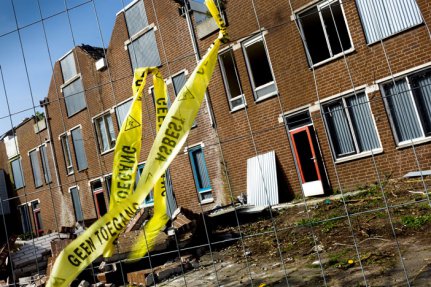 The plan was to set everything up on day 1, and remove the asbestos on day 2. Together with the removal workers, contractor and clean-up team, we formed the construction team. The removal workers specifically spent their time communicating with the residents, which went smoothly. The students all left their rooms early in the morning. After that, the removal workers made sure that we still had just enough room in order to set up a foil wall with wooden frames, designed to prevent damage.

The second day was all about removing the asbestos. In the rooms, we set up special French partitions with flaps in the doors. These ensured sufficient airflow in the containment area. In addition, we used extra-heavy negative pressure units. There was a large independent air unit on the balustrade from which several hoses were led in. All of this was to ensure that the fibre concentration remained as low as possible. In just one shift, all the asbestos on the outer wall was completely removed.

When removing amosite, you usually have to wait at least a few hours to make sure that all fibres are gone. However, there quite simply was no time for that this time: straight after the removal, SGS Search carried out their final inspection. Forty pumps were prepared, deployed and analysed every day – an enormous task! After the measurement, the process was immediately interrupted in order to move on to the next unit. Right after completion of the asbestos removal, the contractor was able to renovate the facade with new cladding and install new radiators in every room. The collaboration was incredibly smooth.

The time factor played a major role during this project. There was no leeway in the schedule, so delays were not an option. The students were out of their rooms for two nights and three days, so everything had to be done within that time frame. Luckily, everything was carried out right on time. Good communication with the residents also played an important role: with a special app, they were able to follow what the precise status of their room was, and which phases of the renovation had already been completed. This helped create understanding and put them at ease, which meant we were able to concentrate on our work.’