In the days before the disaster in Enschede, the Dutch media devoted a lot of its coverage of the fire at ATF in Drachten. Though this fire was considered hazardous to public health and to the environment, it did not (of course) compare in any way with the disaster in Enschede. That was not the case, however, for a number of workers at SGS Search. They had to draw on every last resource to prevent any further damage to public health or the environment in the aftermath of this fire.

In May 2000, SGS Search Environment B.V. received a call in the early hours of the morning requesting assistance in tackling a fire at the ATF warehouse in Drachten. It was quickly apparent that they were dealing here with the storage of hazardous substances that would require the use of ‘heavy equipment’. A total of 35 different hazardous (waste) substances were being stored in the warehouse at the time of the fire, which required two mobile laboratories and a Self-Contained Breathing Unit from SGS Search Laboratories B.V. Throughout Friday night and early Saturday morning a list of the hazardous substances was compiled and handed over to the project leader. In consultation with all the other parties involved, a sample protocol and analysis strategy were drawn up. It was clear that a combination of a number of the hazardous substances could lead to the release of harmful vapours and gases. 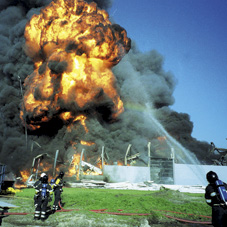 With the help of extensive personal protection equipment, the presence of a large number of hazardous components in the plume of smoke was determined. Using rapid analysis techniques, the team was able to establish within a matter of hours that the risks involved primarily the release of PCBs and dioxins.

The crisis team was advised to carry out further research directed particularly at establishing the size of the area contaminated by these substances. After consultation with the crisis team, SGS Search Environment B.V. was given the task of drawing up a plan to come up with a responsible and rapid decontamination of any dioxin and PCB deposits. Immediately after receiving the first analysis results, this plan was made available to any victims of the fire and the specialised cleaning companies. This rapid response was the result of the working methods employed, which served to prevent any further damage to the businesses affected in the area.

The evaluation report clearly showed that this disaster was efficiently dealt with as a result of the effort put in and the combination of the expertise of all those involved. Thanks to the capability of the team of experts, including SGS Search, the possible consequences of the release of dioxins was recognised on time and dealt with in a safe and responsible manner. An even more extensive (environmental) disaster in the region was thus prevented.

Back to our References